A Render Farm got stick bugged. A Render farm is a group of networked computers devoted to rendering images, used typically in the production of computer-animated films.The Motion capture data of stick insect start to embody the simulated photorealistic substances and substituted their exoskeleton into synthetic materials which mimics the physical materials.

In the essay “Mimicry and Legendary Psychasthenia”, French surrealist philosopher Roger Callios discuss animal mimicry and the “instinct of abandon” that drives it. He mentions about the Stick insect, that “The Phasma Carausius Morosus, which by its form, colour, and attitude simulates a plant twig, cannot emerge into the open air without being immediately discovered and dined on by sparrows.”. Caillois recounted the mimicry is actually a dangerous luxury for an insect; “we are here dealing with a luxury and even a dangerous luxury, for there are cases in which mimicry causes the creature to go from bad to worse”

He connects Mimicry as the death drive to the “lure of space,” which is not the temptation to make space in our own image (as a colonizer might), but rather a temptation to abandon our image to the surrounding space, becoming part of the scenery. He described animal mimicry as a kind of three-dimensional photography or “teleplasty,” in which the animal resembles a photograph of its surroundings because it literally embodies them.

The render farm stick bugs abandon themselves in the network of datas and merge into waste landfill of syntetic materials. The towers of computers running 24/7 without a break, like blockchain farm, will affect the environmental status including the 'real' Phasma Carausius Morosus overpopulation. The death-life drive circulates in the loop. 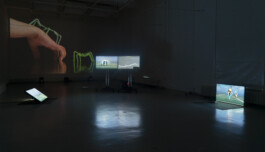